Thorpe has been rather quiet of late so I decided to head out to Horsey Gap on my day off for a late morning stroll along the path behind the dunes. At various times last year I saw here; Wheatears, Whinchats, Stonechats, Meadow Pipits and Tree Sparrows. The section adjacent to the pillbox is often particularly fruitful and this is where today I again saw a pair of Stonechats.

Lunch was taken at the nearby Nelson Head P.H before taking a look at the hundreds of Grey Seals loafing around on the beach. Quite a site for those that haven't seen them and well worth a look. 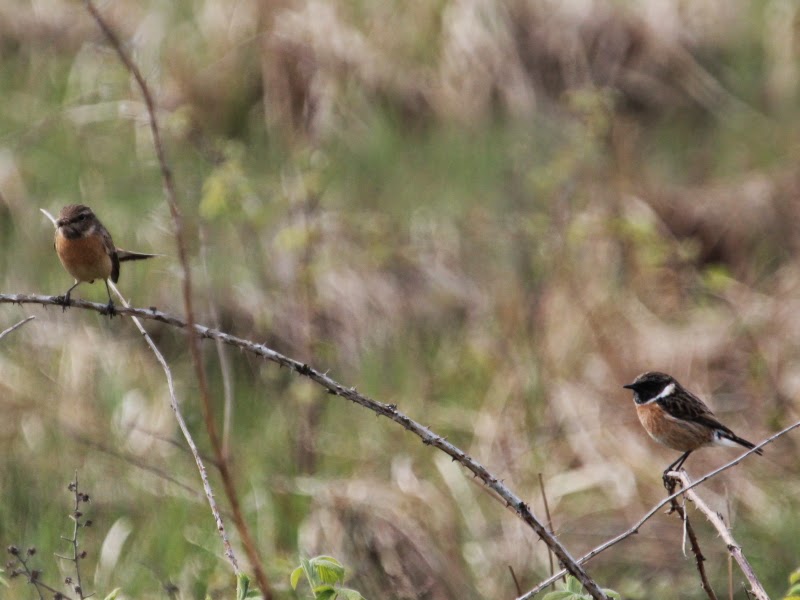 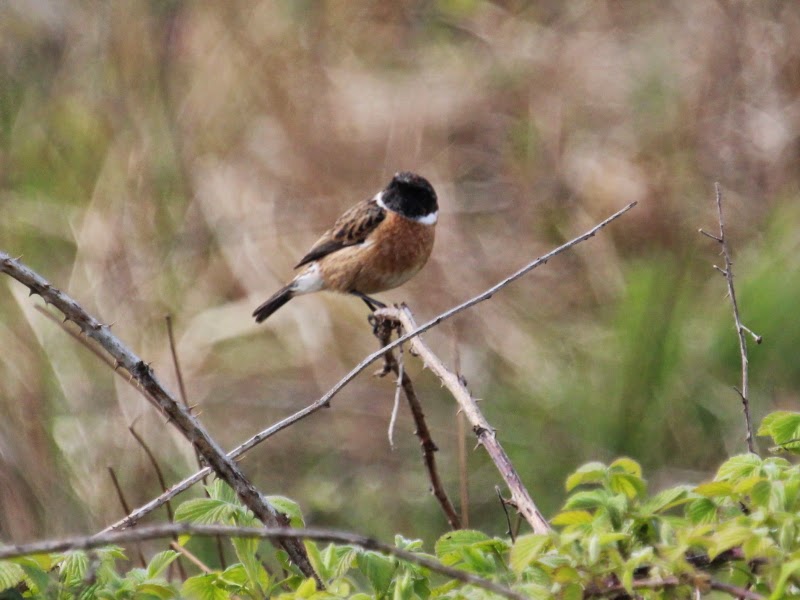 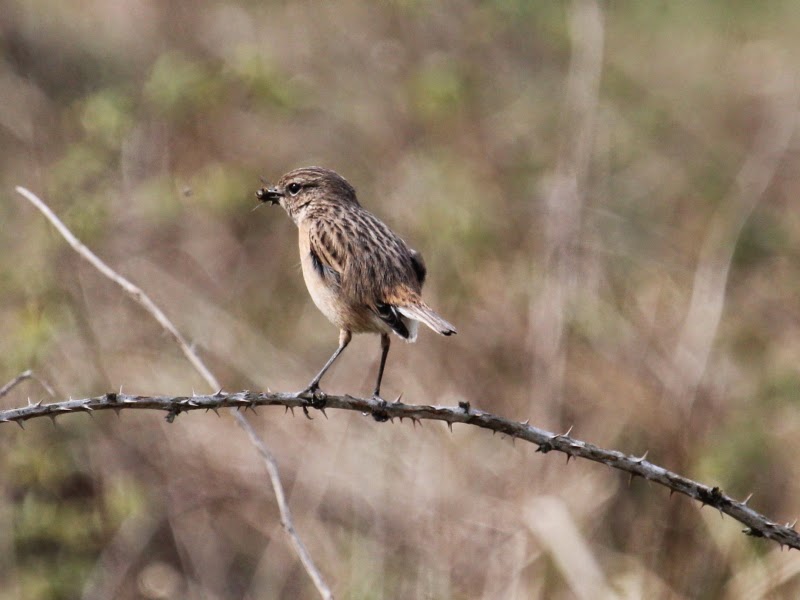 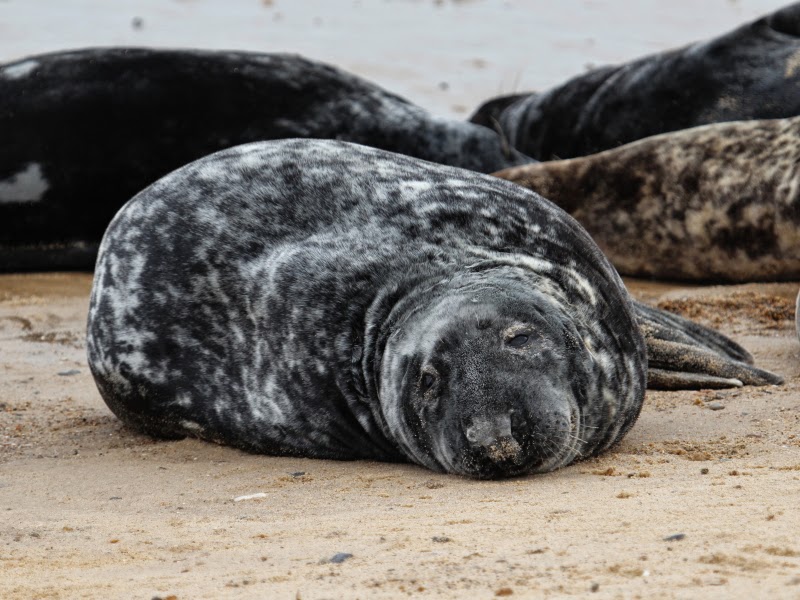 Due to various other commitments I haven't updated this blog recently but look forward to doing better in the coming weeks!

Regards to all. Paul

Posted by Paul Davidson at 16:09 No comments:

A couple of visits to Thorpe Station Marshes during the last week. On my first visit last Sunday I was observing a pair of Reed Warblers at the start of the path that leads to Bungalow Lane when I became aware of a Cuckoo calling very close by. It flew out from an Ivy covered tree and passed immediately overhead affording me the closest view of a Cuckoo that I think I have ever had!

A Cuckoo continued to call this weekend, however it was rather windy and most of the resident warblers stayed within cover. A Sedge Warbler did appear briefly above the reeds enabling a brief photo opportunity. 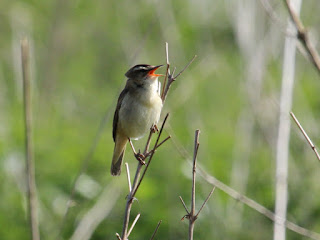 Buffy and Sonia of The Big Norwich Bat Project emailed the results of the survey carried out in my garden on Sunday night. Very comprehensive, it gives details of the night's bat calls including timings and various other bits of information.

We had 8 bat passes consisting of 5 Common Pipistrelle, 1 unidentified Pipistrelle and 2 Noctule. Not sure for the reduction on last years total of 40. It was rather cold, the temperature dropping as low as 8 degrees Centigrade.

All in all a very interesting exercise and well worth surporting.
Posted by Paul Davidson at 14:35 No comments:

I decided to take advantage of the fine weather and have a stroll around the marshes before lunch. The reserve was absolutely alive with birdsong. There seemed to be warblers everywhere!

Last year almost unbelievably I failed to see a single Blackcap, today I saw two. One near the footbridge, the other on Bungalow Lane. Also seen in abundance were Common Whitethroat, Sedge and Reed Warblers, and Reed Buntings.

I heard my first Cuckoo of the year calling out from the Bungalow Lane area. Also of note were the large number of Orange Tip Butterflies fluttering over the Marsh. 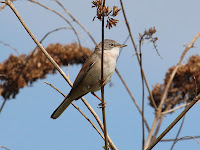 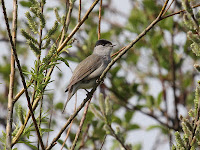 Posted by Paul Davidson at 08:31 No comments:

I have always been conscious of the presence of bats in my back garden so was interested to find out more. The survey equipment registered 35 Common Pipistrells, 3 Noctules and 2 unidentifiable Pipistrells.

Today the monitoring equipment was set up for this years survey. It was interesting to note that insect traps had been added from last year. Logically certain types of insect population I assume are linked to bat population.

Stay tuned for the results! 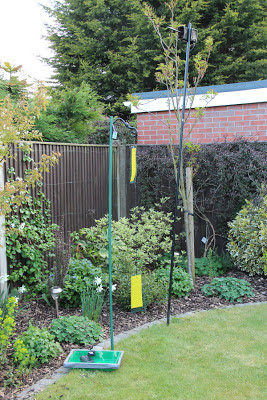 Posted by Paul Davidson at 14:24 No comments:

At last with temperatures around 15 C and the sun shining things looked a bit more promising than of late.

At the very least I was hoping to hear a Chiff Chaff. Nothing near the footbridge where there had been some recent sightings. I decided to head for Bungalow Lane where I remember seeing several in the treetops last year. Whilst walking along the path leading to the Lane I heard one in the adjacent thick woodland. When I got beyond the railway crossing on Bungalow Lane itself sure enough I saw three Chiffchaffs in different locations. One was sufficiently bold to let me get a couple of decent photographs. 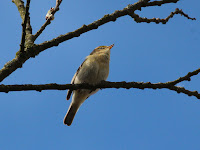 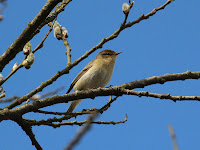 On the shingle spit were two Oystercatchers. I also saw my first Butterflies of the year, three Small Tortoiseshell enjoying the sun's warm rays.
Bumped into Ricky (Shakys Birding Blog) on the way around the circuit. Nice to have a chat and catch up since our meeting last year!﻿
Posted by Paul Davidson at 07:46 No comments:

Things seem to be getting a bit busier at the feeding station than of late. A new addition to the Bergh Apton list was a Grey Wagtail that settled briefly in the yard. Too brief for a photograph unfortunately!

Greenfinches that have been missing for several months have returned along with Goldfinches that feed almost non stop on the Niger seed. A Great Spotted Woodpecker makes regular visits which poses the question as to wether this is one of a breeding pair from last year.

The visiting Moorhens are showing unusual behaviour. Clambering up on the metal framework they feed greedily from the seed feeder. Not to be outdone a Pheasent does likewise! 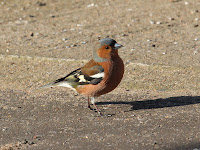 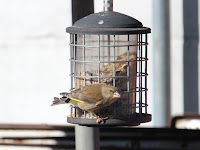 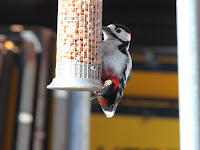 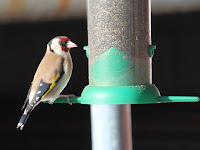 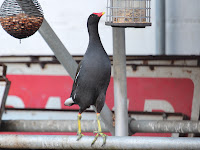 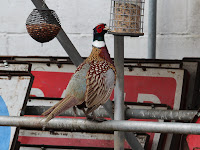 Posted by Paul Davidson at 15:13 No comments:

These excellant blogs enspired me to have a go myself!

Paul Davidson
Norwich
Welcome to Paul's Nature Blog. I live in Thorpe St Andrew and work at Bergh Apton. This blog centres mainly around these two locations. I visit Thorpe St Andrew Marshes regularly as it's only ten minutes away from where I live. When I get a chance I walk around the little known Scop Hill Nature Reserve at Bergh Apton during my lunch break. Finding something interesting or unusual on these local "patches" gives me a great deal of satisfaction. Feel free to leave comments or corrections.